About Us » School History

Ronald Wilson Reagan, was born February 6, 1911  and lived until June 5, 2004. He was the 40th President of the United States (1981-1989) and the 33rd Governor of California (1967-1975). Born in Illinois, Reagan moved to Hollywood in the 1930s, where he became an actor, President of the Screen Actors Guild (SAG), and a spokesman for General Electric.  During his Presidency, Ronald Reagan pursued policies that reflected his optimism in individual freedom, expanded the American economy, and contributed to the end of the Cold War. Below is a picture of the actual portrait of President Reagan that hangs in the White House today.

We are located in the bustling and growing city of Wildomar, California. 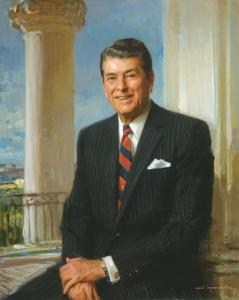